How to Budget for Estimated Tax Payments 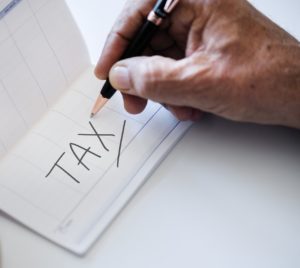 According to a March 22 Internal Revenue Service News Release, 2018 federal tax filers might be able to have any penalties for an underpayment of estimated tax removed. This could be possible if they’ve paid at least 80 percent of their 2018 tax obligations through either quarterly estimated payments, income tax withholdings or a combination of both during the 2018 calendar year.

This new level was established after the 90 percent payment requirement was reduced to 85 percent of estimated tax obligations on Jan. 16. With paying estimated taxes a legal requirement for many taxpayers, let’s examine how this works for individuals and business entities.

For the most part, corporations are required to pay estimated taxes if they project owing taxes of at least $500 as part of their tax return filing.

When it comes to other entities, including sole proprietors, partners, shareholders of S-corps and individuals, estimated tax payments are required if there is an expected tax obligation of at least $1,000 with their yearly filing.

As income is earned, so must taxes be paid through either estimated or withholding tax remittances to the IRS.

Estimated tax payments might be necessary for workers who have not had enough withholdings taken from a variety of earnings. It can come from salaries or pension payments, or from interest or dividend payments, alimony, capital gains or sweepstakes winnings. Self-employed individuals are required to pay estimated taxes to help cover any applicable alternative minimum tax obligations, along with self-employment taxes and income taxes.

If there’s not enough tax paid via withholding and/or estimated taxes, or if they are paid late, there could be a penalty assessed. This is regardless of if a refund is due the taxpayer when a tax return is filed.

When Estimated Tax Payments May Not Be Required

For those who receive compensation in the form of wages or a salary, employers can work with their employees to withhold the appropriate amount to lessen the chances of estimated tax obligations. Other scenarios that can provide an exemption of paying estimated taxes are when no taxes were due the previous year (or not legally required to file a return), and the applicant was a resident or American citizen for the entire year and the past tax year consisted of 12 months.

Required four times every calendar year, estimated taxes can be paid weekly, bi-weekly or monthly. It doesn’t matter the frequency of payments, as long as the estimated taxes are remitted by the due date.

While there are different requirements for workers in certain industries, such as fishermen and farmers, for those filers who fail to pay what’s required of their taxes, be it estimated or withholding, the IRS can assess a penalty. However, if the taxpayer meets one of the following criteria – based on the lowest figure – they can expect to avoid a penalty:

However, with the recent IRS news release, for 2018 at least, the 80 percent threshold has been established. Other ways filers might be able to get amnesty from this penalty include if the person becomes deceased; retires once they turn 62 years old; or develops a disability within the tax year when the estimated tax payments are due. The under-payment of estimated taxes must be “due to reasonable cause” and not purposely trying to avoid payment.

Determining and paying estimated taxes is not a one-size-fits-all requirement by the IRS, but it’s a legal requirement for millions of Americans and those living and working in the United States.