5 Things to Start Doing in the New Year 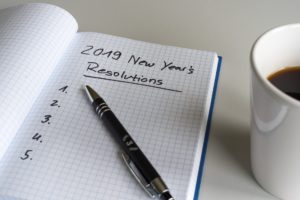 New Year’s resolutions usually involve stopping things like eating, drinking and spending too much – and so on. You know the drill. However, according to U.S. News & World Report, 80 percent of New Year’s resolutions fail by the second week in February. Why not switch things up this year? Instead of setting yourself up for disappointment by attempting to abolish negative behavior, why not start doing some positive things? You’ll improve your quality of life and maybe even help the world. Here are few ideas to kick things off.

This is so easy and so doable. All you have to do is get an extra trash can and throw your plastic and aluminum cans into it. Then look up where your local recycling drop-off point is and enter it into your GPS. Put it on your to do list, swing by on the way to or from the grocery store and boom, you’re done.

You can start with social media. According to a study funded by the U.S. National Institutes of Health (NIH), people who used social media the most were about 2.7 times more likely to be depressed than participants who used social media the least. Not taking your phone to the dinner table and limiting the amount of television you watch are good ideas. You can clear your headspace of the drama and pain that’s going on in the world and focus on your loved ones and most important, your own mental, spiritual and emotional health.

In addition to expanding your world perspective and understanding another culture, there are other incredible benefits of learning a new language. These include improving decision-making skills, memory and multitasking skills, as well as increasing your attention span and cultural sensitivity.

In addition to providing instant joy and changing your mood, laughter also has some very real health benefits. First, it boosts the immune system, decreases stress hormones and increases immune cells and infection-fighting antibodies, which improve your resistance to disease. Second, it triggers the release of endorphins, the body’s natural feel-good chemicals that provide an overall sense of well-being and can even temporarily relieve pain. Third, laughter protects the heart, improves the function of blood vessels and increases blood flow, which can help protect you against having a heart attack and other cardiovascular problems. Finally, laughter burns calories, diffuses anger and, according to a study in Norway, just might help you live longer. Clearly, laughter is the best medicine.

Start Focusing on What You Have

In a world dominated by social media, celebrity worship and materialism, it’s easy to zero in on what you don’t have and focus on scarcity. Instead,

start noticing, appreciating and celebrating what’s currently in your life. If you need to, make a gratitude list and review it when that ache of lacking rears its ugly head. Your spirit will be refreshed and you just might realize that you have more than enough.

These are just a few of the many good things you can start doing in 2019. Keep your ears and eyes open for other opportunities to build on the positive and cherish the life you’ve been given.